2017 was the year of Bitcoin (and Trump). One can hardly turn left without hearing about them. While fundamentally I believe in block chain technology and bitcoin’s long term viability, the futures market is still small and illiquid, which rules out the possibility of including it for our institutional program. However, in the interest of educating our readers, we shared some reputable resources for understanding this latest phenomenon at the bottom.

Judging from the amount of interest and the frequency of bitcoin coming up as a conversation topic, I am sitting on the sideline (painfully, I might add) until such time “mass pessimism” sets in. For now, it is trading entirely by psychology; technical analysis is pretty useless, let alone fundamentals. Longer term, it should become obvious that block chain will emerge as a new internet protocol and bitcoin its champion.

To get a sense of the magnitude and velocity of the bitcoin ascent,  look at the chart below through early December 2017 comparing many historical bubbles. 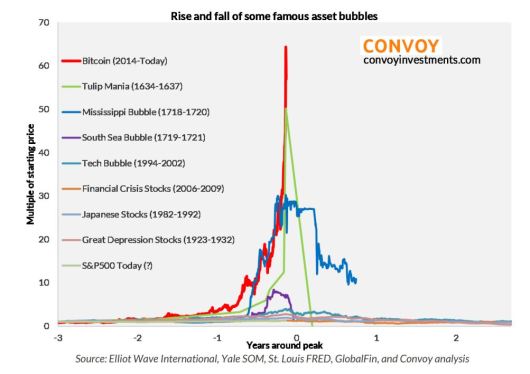 To be sure, the internet age has enabled this bubble to explode with such ferocity. And the age of Trump is not a cause, but the effect of many of the same things coming at us. The speed of data, the spread of information, instant gratification, loose monetary policy, disdain of institutions, rising populism, and I would even throw cult (celebrity) worshiping in the mix.

A currency has to serve at least two functions: store of value and medium of exchange. The lack of acceptance of bitcoin and the wild fluctuations make it infeasible (for now) as money. Storing value in bitcoin, or for that matter, precious metals, is a valuable proposition. In fact, the lack of physical form is both a pro and a con, but for generations growing up with the virtual world the macro is shifting in bitcoin’s favor. Inelastic supply, anxiety about fiat currencies, and anonymity are a combination irresistible to many groups, gold bugs and preppers (!) included.

At Kronos, we believe simplicity is the antidote to complexity. But simplicity does not mean simple-mindedness. In order to achieve simplicity, one has to establish a firm command of the subject matter. Just ask any pro athletes. In light of that, here’s our curated list of bitcoin resources.